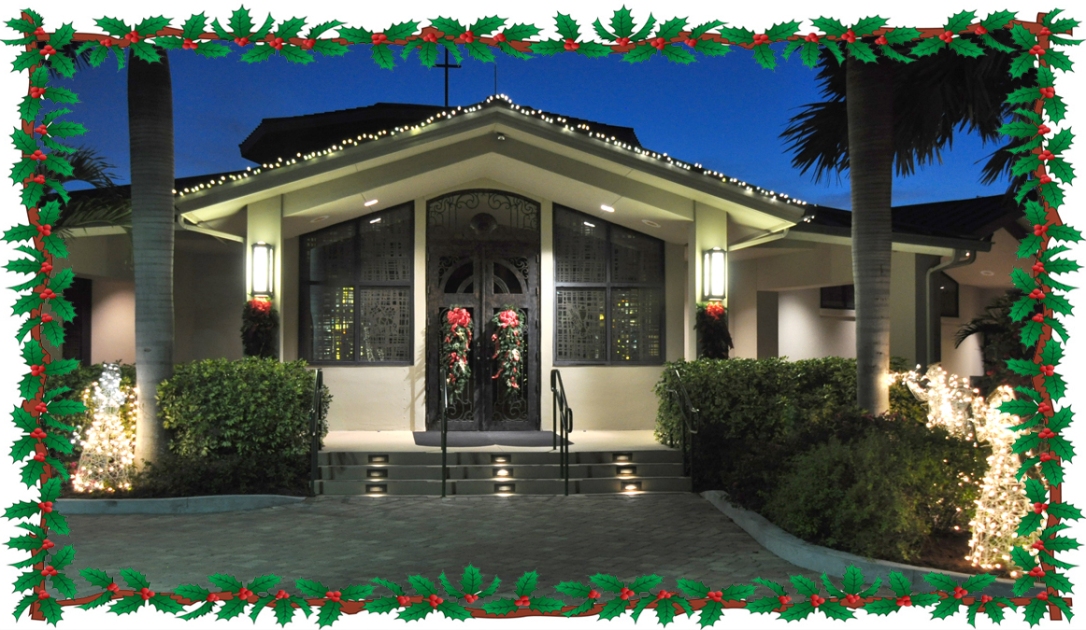 Leaving the cathedral he saw its reflection grow smaller and smaller in the rear view mirror. Driving miles from the sacred space, indeed to another city, Frank Dewane opened the electric gate he had installed to surround the estate he occupied after taking command of the diocese years ago. Entering his luxuriously appointed abode he thought to himself how appealing the thought of a nightcap sounded to end what had been a long day. Yes, another drink would be perfect to conclude this twenty- fourth day of December.

He sat down at the bar, reached for a familiar bottle and proceeded to pour. Lifting the beverage to his lips, he suddenly felt a soothing wisp of air as if someone had let a gentle breeze drift quietly through a nearby open window. The unexpected waft caused a cocktail napkin to float silently to the floor. Groaning, bending over to retrieve it, in a whisper that inexplicably seemed to fill the room around him, he heard a voice calling, “Frank Dewane”.

He uprighted himself so that he once again was facing the mirror behind the bar. Fortunately, he did not see his own reflection, but rather the face of someone else.  “Who are you?” he inquired to what should have been his own likeness. “In life I was your predecessor,” came his answer.  “Bishop Nevins?” he muttered in a questioning manner while in fact he knew the guess to be correct.  “Yes, Frank, and I am disappointed at what I have seen happening in my diocese in the course of these past ten years. However, in the true spirit of Christmas and Christianity,   I have found it in my heart to forgive you. Tonight you be visited by three spirits. Look for your own heart and see if you can find the true spirit of Christmas and Christianity that I pray exists somewhere deep within you.” And with that, the image in the mirror faded away leaving Dewane to face himself in the mirror once again.

Dismissing the promise of spirits to come as a truth he just did not wish to accept, Dewane lumbered off to his bedroom and swiftly fell into a deep sleep.

“Dewane. Frank Dewane,” the unfamiliar voice woke him. “I am the ghost of St. Isabel past. Arise and come with me.”

“Go away,” Dewane responded not wanting to be bothered by the vision he was still doubting even existed. “Be gone with you. Go see the chancellor, he will take care of whatever it is you might want.”

Ignoring Dewane’s refusal, the figure magically lifted him and transported him to a distant place.  “Where am I? What is this place? There is a palpable feeling of love and joy that is almost overwhelming. Everywhere I look I see people filled with the Christian spirit, enjoying the fellowship of those around them. The love of God is real and present here, and as warm and comforting as the beautiful music that surrounds me. I don’t know this place,” Dewane exclaimed.  “No, you don’t,” replied the figure floating over his shoulder.  Dewane looked about the the sanctuary and noticed a man standing in the front of the church.   “And who is that? The people are listening to him so intently, soaking in his every word. It is actually possible to see how his message is moving these people, lifting their spirits. Who is that man? I don’t know him.”  “No, you don’t. That is Father Christopher. You never took the time to know him. If you had truly gotten to know this priest in your diocese, you would have realized how impossible it was to believe the false accusations that were made against him.”

Once again, dismissing the truth that lay before him, Dewane shrugged it off and found himself back in his gated refuge.

“Dewane. Frank Dewane,” the voice bellowed from the next room. “Come here beside me,” it beckoned. Entering the adjoining room, Dewane ogled the intimidating figure in the corner. Hesitantly, but feeling as if he had little choice, he obeyed. He sat, attempting to take a position of power, but it was impossible for him not to feel insignificant next to the looming figure. “I am the ghost of St. Isabel present.”  Listening inattentively, and spying an unattended libation, Dewane quickly snatched it up and took a swig hoping to go unnoticed. An immediate sense of caring for others swelled within him, a feeling totally foreign to him in his almost seven decades on the planet.  “Oh, this is tasty, and it makes me feel all giddy and good inside. I feel… I feel… Nice!” Dewane giggled, as he gulped down more of the metaphorically intoxicating beverage. “What is this wonderful concoction?”

“It is the Milk of Human Kindness, and it is no surprise to me that this is a drink you are totally unaccustomed to its taste. Now put that down, for we have a place you need to see.” And, in the blink of an eye, Dewane and the magnificent figure materialized in a location away from the bishop’s estate.

Adjusting to the light in his current environment, Dewane looked quizzically at his new, special friend. “Where are we now? It looks familiar to me, and yet, at the same time, I feel oddly unacquainted with it.”   A bit frustrated with the ignorance of his charge, the figure answered, “You should recognize this place. It is St. Isabel Church.”  Displaying his confusion again, Dewane asked, “But where are all of the happy, loving people that once filled this space? Where is the beautiful music and the welcoming feeling that once made this place feel so warm and spiritually fulfilling? There is no joy here like there was before.”

“No, Dewane, there is not. Everything that parishioners, and visitors alike, once came here to enjoy is now gone. And, unless your eyes are too blind to see, you will notice that the man, your priest, Father Christopher, who brought such joy to this parish, is no longer here either.”  “Can we leave this place now? It is no longer a pleasant place to be,” sniveled Dewane.  “Yes, that is precisely what the people you no longer see here have decided.” And, in an instant, Dewane’s wish was granted and he was away from that place of despair, back in his ever-so-safe corner of his world.

Back, but he was not safe from the realities he so often chose to ignore, for there lurking in the shadows was the third spirit, whose visit was foretold. The ominous figure exited the shadows as it approached Dewane.

“And I suppose you are the ghost of things to come?” The shrouded figure nodded in answer to Dewane’s query. “I’m not afraid of you. I am bishop of this diocese. What you have to say has no consequence for me.”  Circling the obstinate bishop, the figure found Dewane’s confidence diminishing. Completing its third rotation around him, they found themselves visiting the place that Dewane had now come to know.

“I know this place. This is St. Isabel Church! But there is no one here… anywhere! Do not tell me that everyone has chosen to leave. Have they left for other churches off the island? Have some even left the Catholic Church?” Dewane looked at the foreboding figure for some type of response.

The figure acknowledged his questions with a single, silent nod.

“Do you mean to tell me that the parishioners’ lack of spiritual fulfillment and the disappearance of the parish life they once loved, eventually made them all leave? Please do not tell me that the collection became so insufficient that the staff was terminated and the doors were all locked for one final time!”

“Spirit of St. Isabel of the future, are these things you show me events that are sure to come? Is this the outcome that must be, or can something I do change the outcome of what has already been?”

Offering no words, the figure vanished and Dewane found himself once more alone in his Sarasota home.  Waking the next morn, Dewane was relieved to find that the interference of the three spirits only ruined one night of restful sleep.

“What did it all mean anyway? Was what he saw at St. Isabel really happening? Was what was foretold really destined to happen? Was he really the cause of such hurt and destruction? Did he really have the capacity to find the true spirit of Christmas and Christianity within him and correct the wrongs he had done?” The thoughts rolled around in his head as he sat comfortably in his gated estate.

It was now Christmas Day! A joyous day, cerebrating the birth of our Lord, Jesus Christ. A season of hope for mankind, goodness and truth. Dewane realized he was now being given the opportunity to correct some of the painful hurt he had brought upon one of his priests and the people in his parish. The spirits had visited him to illustrate that it was not too late to change his ways. Dewane stopped. Reflected on what he had witnessed. He pondered. He thought… perhaps he should give this opportunity to change some serious consideration

Join us in our fight to have Fr. Senk returned to St. Isabel parish by adding your name to our petition
Click Here to Sign

We are a large group of St. Isabel parishioners who believe in the innocence of our Fr. Christopher Senk, who has been accused of soliciting money from a parishioner contended to be of unsound mind.

Though he has been cleared of the charges by the Lee County Sheriff's Office, he finds himself unable to practice his faith as a priest due to a futile investigation by the Diocese of Venice.

We want Fr. Senk back and dedicate this site to finding justice for our beloved priest!

Join us in our fight to have Fr. Senk returned to St. Isabel parish by adding your name to our petition | Click Here to Sign